Yesterday marked the closing of  a chapter in the annals of Moundridge Manor history; we said goodbye to our Administrator of almost 24 years, Ron Classen. In the morning a special break for the residents was served which included Druber’s donuts, party mix, cheese & crackers, punch, and coffee. Following the goodies, Ron had a short speech with time given afterward for anyone who wanted to make a comment, or express their appreciation of all Ron has done. At 12:30, the Board hosted a hamburger fry with all the employees, board members, Ron’s family, and a few friends invited to attend. We enjoyed hamburgers and all the fixin’s, baked beans, chips, and homemade icecream. After everyone was finished eating, Ron gave a short farewell speech.  Later, amid guffaws, chuckles, and maybe even a few tears, we listened to staff members share memories and thank-you’s. We will miss you Ron, but we wish you much happiness and many blessings in your retirement.

Now, on to the construction bit… the windows are almost all in! If any of you drive up to the Manor from the north, they will probably be the first thing that catches your eye. They look really nice! Might I even say snazzy?? For those of you that are not in the area, and have not seen any of the blueprints, I am inserting a small illustration below so you can see what I mean. This blueprint shows the west side of one of the new wings of private rooms; the protrusion on the left is a solarium with almost floor to ceiling windows. The four sets of windows in the middle are each in a resident room. It is a little hard to tell from this view, but each set of resident room windows has one wider window and one narrower window, forming somewhat of a V shape.  Well, I think that is all of the news for now! Take care! 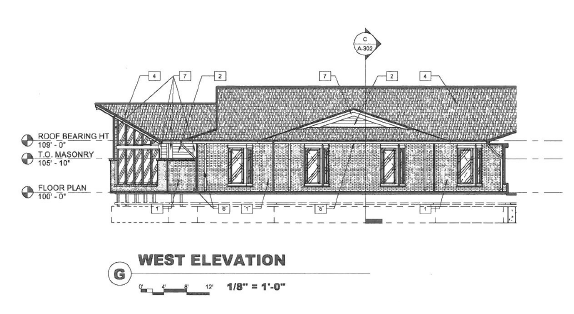 Copyright ©2022 Moundridge Manor, Inc.
an Adult Care Home of the Church of God in Christ, Mennonite